A.G. Howard was inspired to write SPLINTERED while working at a school library. She always wondered what would've happened had the subtle creepiness of Alice's Adventures in Wonderland taken center stage, and she hopes her darker and funkier tribute to Carroll will inspire readers to seek out the stories that won her heart as a child.

When she's not writing, A.G.'s pastimes are reading, rollerblading, gardening, and family vacations which often include impromptu side trips to 18th century graveyards or condemned schoolhouses to appease her overactive muse.

1. How different is it to write a retelling/spinoff compared to a regular, self imagined book? What kind of limitations did you have to work with in writing Splintered?
I don’t think there are any hard and fast rules. I do think it’s important to make the most of the original author’s vision, craft your story as a tribute and a companion to the original, by giving the characters/details a deeper meaning. When done right, it makes the reader want to revisit the original work. That, to me, makes even a retelling a successful story in its own right, when it whets the reader’s appetite to plunge into another book that might’ve been on their shelves for years, gathering dust.
2. What made you choose Alice in Wonderland to re-create?
I’ve always been a huge fan of Carroll’s masterpieces, but the real spark lit back in in April 2010, when I first saw the Tim Burton and Disney Alice adaptation. I’m a very visual person, and the Burton cinematography was so vivid, techno-colored, and evocative that I didn't want the movie to ever end. So I came up with my own settings in my mind, and played out Wonderland continuations and scenarios. The idea became too big to contain in my head and I had to get it out on paper.
3. Team Jeb or Team Morpheus? What makes each boy unique and likeable?
As the author, I refuse to choose sides! LOL. I love both guys. They each bring out and complement different qualities in Alyssa—not just her light and dark sides, but how she makes decisions, either cautiously or spontaneously; or how she views the world, either as a canvas or as a playground. She has a tough choice to make, because it’s more than just choosing a guy. It’s choosing which way she wants to live her life. If I were Al, I’d pick Jeb in the here and now because he’s steady, noble, and shares her interests and goals; but I’d pick Morpheus in the far-away future, because he’s immortal and will still be young and up for some fun even in seventy years or so.
4. How close did you want to keep to the Alice in Wonderland classic?
I knew I wanted my main character, Alyssa, to be able to converse with bugs and flowers, because the talking flower scenes in Carroll’s two books, the Disney cartoon, and the Tim Burton/Disney rendition, were some of my favorites. Also, I always remembered the scene from Through the Looking Glass when Alice is riding a train through the countryside and has a conversation with a gnat. Those were such quirky and indelible images, that I just had to incorporate them somehow. I wanted my heroine to be tied to the original tales in a very visceral way so I decided to make Alyssa a descendant of Alice Liddell, the real-life girl who actually inspired Carroll to write his story to begin with. The blood tie to the Liddells became the basis for all of the weird aspects of Alyssa’s life, including the talking bugs and flowers. Also, I wanted a colorful/vivid world edged with creepiness for my Wonderland setting because Carroll's works always had that underlying creepiness to it. And lastly, I wanted to incorporate one of my favorite characters who doesn’t get nearly enough screen time in the remakes that I’ve seen, the Caterpillar.
5. Is there going to be a sequel to Splintered? If so what can we hope for?
Yes, it’s titled UNHINGED and is due out January 2014. We’re being really sneaky and sly about the premise at the moment, but here are some hints I can share: a bridge in London, a key and a heart pendant, and The Corpse Bride’s wardrobe. Also, Morpheus, Alyssa, and Jeb all have their moments in the spotlight, along with a few favorite Wonderlandians, and even some new warped ones from the books that I haven’t touched on yet.
6. If you could spend a day in Wonderland what would you do and who would you meet?
Oooh. That’s a toughie. Probably the Ivory Queen’s castle where everything glimmers with ice crystals, even the transparent walls.  It’s just so beautiful to imagine. And because Ivory is so lonely (spends her days and nights looking out through the glass as the warmth of the world passes by but never actually touches her), she’s always looking for a reason to have guests. Hopefully she would throw a party so I could meet lots of different Wonderlandians all at once. ;) 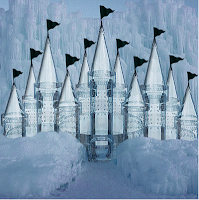 7. Do you think you would have what it takes to make it out with your head?
Haha! Not sure. If I didn’t, hopefully Morpheus would lend me one of his fab hats to cover my empty neck. LOL
8. A lot of things in this book had extra meanings that all came together in the end. How long did it take you to map it all out and tie it together?
The book took me six months from start to finish, and that includes plotting/research/tying up loose ends. I usually only do skeleton plots, which allows for flexibility when I’m writing. But I did have to write a rather detailed outline of the scenes in Wonderland since it does get a little complicated—who Alyssa and Jeb would meet, what roles the creatures would play in their “quest”, and even what “tasks” she’d be expected to complete in order to come home—but it still didn’t turn out exactly as I’d planned. The characters all had a few surprises for me along the way, most especially Morpheus. And most especially at the end…
9. What was the most difficult thing in writing Splintered?
It was important to me that my book be a tribute to Carroll's amazing works without copying him, and that’s not an easy balance to capture. Lewis Carroll won my heart as a child by weaving underlying threads of violence and eeriness into his nonsensical scenes and characters. So I tried to pay respectful homage to those elements while coaxing the funkiness/creepiness from subtle nuance to center stage. I’m hoping I accomplished that, and if I could have only one wish for my book, it would be that Splintered will entice readers to seek out the Carroll originals if they aren’t already fans, because those books are masterpieces. This stunning debut captures the grotesque madness of a mystical under-land, as well as a girl’s pangs of first love and independence. Alyssa Gardner hears the whispers of bugs and flowers—precisely the affliction that landed her mother in a mental hospital years before. This family curse stretches back to her ancestor Alice Liddell, the real-life inspiration for Lewis Carroll’s Alice’s Adventures in Wonderland. Alyssa might be crazy, but she manages to keep it together. For now. When her mother’s mental health takes a turn for the worse, Alyssa learns that what she thought was fiction is based in terrifying reality. The real Wonderland is a place far darker and more twisted than Lewis Carroll ever let on. There, Alyssa must pass a series of tests, including draining an ocean of Alice’s tears, waking the slumbering tea party, and subduing a vicious bandersnatch, to fix Alice’s mistakes and save her family. She must also decide whom to trust: Jeb, her gorgeous best friend and secret crush, or the sexy but suspicious Morpheus, her guide through Wonderland, who may have dark motives of his own. {Goodreads}

The Details:
-Must be thirteen years old to enter
US only!!!!
-Winner has 48 hours to respond before a new winner is chosen
-Ends 6/8/13

Good luck!! :D
Hope you enjoyed this interview as much as I did!!
You guys need this book! One of my 2013 debut favorites!
Enter! Don't miss this amazing opportunity!! Its stellar. Equivalent to the golden goose egg! ;D
Have a wonderful day *muahaha* ;)
~Jaiden
Created by, Jaiden at 5:30 AM