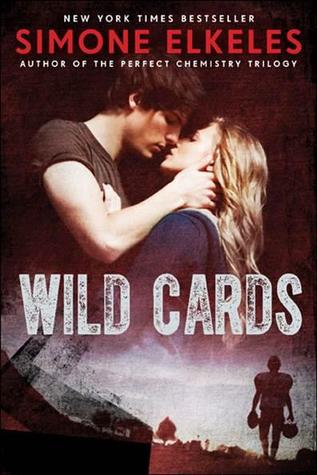 After getting kicked out of boarding school, bad boy Derek Fitzpatrick has no choice but to live with his ditzy stepmother while his military dad is deployed. Things quickly go from bad to worse when he finds out she plans to move them back to her childhood home in Illinois. Derek’s counting the days before he can be on his own, and the last thing he needs is to get involved with someone else’s family drama.

Ashtyn Parker knows one thing for certain--people you care about leave without a backward glance. A football scholarship would finally give her the chance to leave. So she pours everything into winning a state championship, until her boyfriend and star quarterback betrays them all by joining their rival team. Ashtyn needs a new game plan, but it requires trusting Derek—someone she barely knows, someone born to break the rules. Is she willing to put her heart on the line to try and win it all?{Goodreads}

~Review:
Holy flipping cow!!!! I can't believe I even got this book! Simone Elkeles is a really well known author thanks to her Perfect Chemistry series. So when I found I had this book in my possession post release I about freaked!! I did a happy jog and everything.

Now, that being said I still haven't read the Perfect Chemistry series yet but it's another one I have been dying to read! I will get to it soon enough I promise! Now to talk about Wild Cards. I really liked it. It was cute and it was funny! Derek is an absolute dream boat and Ashton is snarky and independent. The banter between these two was delightful. I enjoyed the multiple POVs. It's always nice to know what is going on through each characters head as they start to fall. Ashton was probably the most stubborn about it. I loved it. ;) Ashton is the star kicker...on the boys varsity football team. How great is that!? The last book--and only other book--that I read with a girl on a boys football team was Catching Jordan. I liked that one but I think I liked this one more....sorry Miranda Kennealy! Even though they were similar I liked Elkeles version better because of the family she put together. The boys on the team looked out for Ashton but they also respected her. I also liked how the verbal language was considerably higher in decency. There weren't as many cuss words as there were in Catching Jordan. I don't mind it often because hello! We are teens and this day in age swearing is about as normal as breathing. But there is respect in words. Elkeles gives that respect. Ashton is beyond independent and even more stubborn. She has the will of--of I don't know (running short in comparisons) but she has a lot of will and determination. She doesn't like things being handed to her. She likes to work for her earnings. I love that about her. She has her quirky habits. She plays to win and she wins because she plays....hard.

Derek is a bad boy. Whoopdey Doo! Isn't it always a bad boy!? Yes. Am I complaining? No. ;) Derek is more of a punk than a bad boy. He is witty and charming and likes to grease pigs and set them loose during graduation ceremonies. Haha ok so he is trouble with a capital T but he is harmless. He isn't the roofing bad boy. He is the prancing bad boy. Ultimately he has a great heart. He fixes up sheds and mows lawn with no ulterior motive. The boy just has a serious mouth and prank problem.

Put the two together and you got one heck of a couple. Goodness these two were making me laugh! They are both incredibly stubborn. It was like watching those goats with the horns ram each other over and over again. Haha lets just say when the first time a couple meets ends with a pitch fork in a shoe...it's bound to be interesting. It was. I read this book pretty fast. The stuff that both Ashton and Derek had Togo through had my full attention. This isn't a light read. It had more depth. Both characters had struggles they had to deal with. This wasn't a heavy read either. It was a light heavy? I don't know don't ask.

Simone Elkeles righting is nice. It flows easily. Each words slides into the next and before you know it you have read half the book. She has a nice sense of humor being able to commit to the snarky replies Derek and Ashton throw at each other. Ultimately Derek and Ashton were adorable especially at the end. Oh my goodness that end was adorable!! I can't wait to read the next one! There was only one thing that bothered me about the book. There was some round about incest. It wasn't true incest but it was enough to make me not jump on the TeamDerekandAshton boat. Derek's stepmom is Ashton's sister. So basically Ashton is Derek's aunt-in-law. No blood ties but I don't know I like to stay away from that stuff. Ya just weird to me. There are so many different ways you could come about a couple meeting and I prefer to stay away from instances like this. Eventually I kind of just ignored that little fact as best as I could and enjoyed the story for what it was.

Wild Cards was an enjoyable read. I loved Simone Elkeles writing style and the story she created. The characters were well developed and the love was adorable. I can't say it was a favorite but it was well worth the read! I would recommend it to all contemporary fans! Like I said before, I haven't read anything else's from Simone Elkeles so I can't compare it to her Perfect Chemistry series. Bottom line: Wild Cards was good..great even! It was fun, funny, and really cute. I really liked it! Give it a try when you got the chance. Borrow it, buy it. However you see fit but I do think it is worth the shot. :)

*a copy was provided for review purposes*