Not only do I get to spotlight an awesome author but...
I also get to honor a book birthday!!
Happy Book Birthday to Ellie James and her trilogy finale...
Fragile Darkness!!! <3
So..let's get started with the fun shall we!!? :D

Most people who know Ellie think she’s your nice, average wife and mom of two little kids. They see someone who does all that normal stuff, like grocery shopping, going to soccer games, and somehow always forgetting to get the house cleaned and laundry done.
What they don't know is that more often than not, this LSU J-School alum is somewhere far, far away, deeply embroiled in solving a riddle or puzzle or crime, testing the limits of possibility, exploring the unexplained, and holding her breath while two people fall in love.
Regardless of which world Ellie’s in, she loves rain and wind and thunder and lightning; the first warm kiss of spring and the first cool whisper of fall; family, friends, and animals; dreams and happy endings; Lost and Fringe; Arcade Fire and Dave Matthews, and last but not least…warm gooey chocolate chip cookies.

1. Your book *Fragile Darkness* comes out tomorrow! What are you most excited for readers to see in this final book?
Great question! Writing a series is a fascinating experience. As the characters grow and change, each book takes on its own, unique flavor. With the Midnight Dragonfly series, the first book, Shattered Dreams, was all about discovery: discovery of Trinity’s psychic abilities, her mysterious heritage, herself, and some pretty important people in her life. By the time the second book, Broken Illusions, roles along, Trinity is much more comfortable with all she learned in the first book, and she’s taking action with it. She’s exploring and experimenting, and as such, taking risks and learning even more. With the third book, Fragile Darkness, I’d have to say what I’m most excited about is the emotional payoff. There’s been so much building throughout the series, and it all comes to a head in Fragile, especially Trinity’s relationship with Dylan. At the end of Broken, she was finally surrendering to the powerful draw of her feelings for him, and yet, events at the end of Broken change everything. It’s almost impossible for them to be together now. It’s a tough journey those two are taking, a journey which really explodes onto the page in Fragile J
2. How was it hearing that your book, your creation, was going to be published? What were your first thoughts?
In a word, fantastic. Trinity’s story came to me in a dream, or at least the opening scene did. It was amazing how quickly the kernel of an idea spun itself into something so much more. Truly, it’s as if this story is happening in some alternate universe, and I’ve simply tapped into it J  Of course, after that initial rush of excitement come all the feelings of doing the story justice. For me, the books I write play in my mind like movies. I live them. I feel them. When my characters hurt, I hurt. When they’re excited, I’m giddy. When they’re afraid, my heart races. When they fall in love, so do I. As a writer, then, my challenge to myself is to portray the story in such a manner than readers feel and see what I’m seeing, too.
3. I've heard that when an author finishes a series they feel a part of them is over as well. Is this true? What are you going to miss most in the series?
Man, this is so true. It’s not really like a part of me is over, but more like some friends I care deeply about have gone away. Not dead or anything, but like they’ve moved to another part of the world, so far away that they won’t be part of my daily life anymore. And it IS hard letting go. Writing is an intimate experience, especially first person, especially a series. I’ve spent three years with Trinity and Dylan and Aunt Sara, Jim and Julian and Grace, DeMarcus and all the others.  They’re real to me. I’ve delved into their psyches. I’ve gone with them to the edge, fallen with them when they’ve gone over, and scrambled to help them pick up the pieces in the aftermath. That’s a lot to let go of.

As to what I’ll miss the most…basically everything. I’ve loved watching Trinity come into her own. I’ve loved watching her relationship build with Aunt Sara. Watching her and Dylan find each other again. Helping her explore just how far her abilities can take her. Sigh.  Maybe this isn’t the end, after all J
4. Who is your favorite character to write about in Shattered Dreams?
You know, that’s a funny question…or at least, the answer is. I’ve been talking with some friends about this, how a series about Trinity has morphed into Dylan’s story. The Fourcade men, Dylan and his father Jim, fascinate me. They have an energy that crackles whenever they’re on the page. I think that’s why I’ve been writing a series of Secret Scenes featuring Dylan’s point-of-view J  Because of his Native American heritage, he has a perspective on the world not normally found in eighteen year olds, but exactly what Trinity needs!
5. What is the hardest thing in the author business? The easiest?
Another great question! The easiest part is the characters. Once they form, they become so vivid to me, it’s like they’re part of me and I’m part of them, and from there, they take over. I feel what they feel, want what they want. Hurt when they hurt. Sometimes that’s emotionally tough, but it’s also incredibly rewarding.

As for the hardest part…I think it’s letting go. I could fiddle with my stories forever, letting my characters turn left instead of right and exploring what happens next. There are so many possibilities, it’s tough to choose one and run with it. With every book I’ve written, there’s something I’d love to change, all the way from adjusting an existing scene to scrapping it altogether and replacing it with something completely different.
6. If you could go back to the teenage years and date any character from any book, who would it be and why?
You know, I wanted to answer with a character from another series, but the truth of the matter is, it’s Dylan. It’s always been Dylan. I think that’s what he is, the manifestation of all my hopes and dreams when I was in my teenage years. He’s the guy who would have swept me off my feet: dark and mysterious, quiet, edgy on the outside but sincere and deep on the inside, a guy who doesn’t crowd or control, who’s confident enough in himself and what lies ahead to step back and let life play, but who, somehow, is always there when you need him. That’s a pretty powerful combination….or at least it is for me ;)
7. Are there any new projects you are starting on? If so, care to share? ;)
Yes! There is a new project, one that’s in the germination phase. It started with a simple, one sentence, “What if” idea, and from there it’s spinning into something that leaves me more than a little breathless. It’s too early to say anything, but I can promise you my favorite concoction: action, adventure, mystery, and romance, plus a healthy does of the Unexplained!

And this picture…..this is the only hint I can give you J 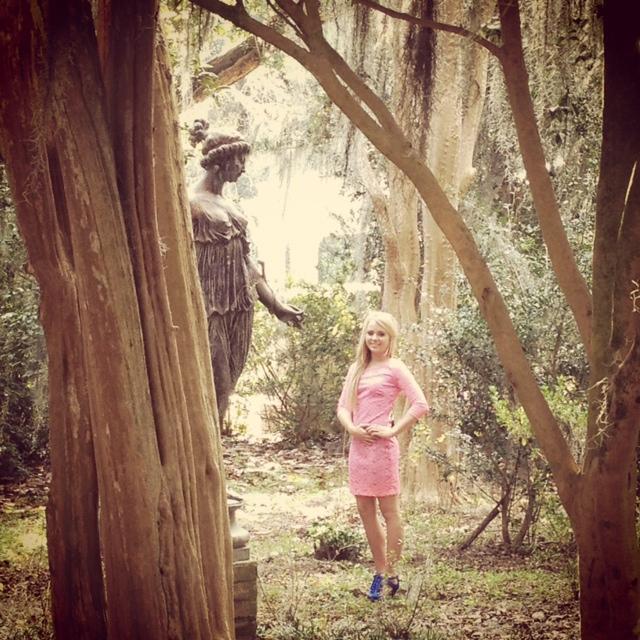 
Sixteen-year-old Trinity Monsour wants nothing more than to live a normal life. But that isn’t as easy as it seems. Trinity is different. She is special. She sees visions, and for those she’s seen, it’s already too late.
Trinity arrives on her aunt’s doorstep in New Orleans with virtually no knowledge of her mysterious heritage. She begins settling into life at a new school and even starts making friends. But all too quickly her dreams accelerate; twisted, terrifying visions of a girl locked in a dark room. And when the head cheerleader, Jessica, goes missing, Trinity knows she has no choice but to step forward with what she’s seen.
But people believe that Trinity has information about Jessica’s disappearance not because of a dream, but because she is involved. She is kind-of dating Jessica’s ex-boyfriend, Chase, and Jessica did pull a nasty prank on Trinity. Revenge seems like the likeliest scenario.
Nothing prepares Trinity for the dark odyssey that ensues while searching for Jessica, including the surprising romance she finds with Chase, or the shocking truths she learns, not just about the girl who has gone missing, but the past that has been hidden from her.{Goodreads}

The rest of the series:

The Prize:
1 signed copy of your choice from the Midnight Dragonfly Series!!!

The Rules:
You must be 13 years or older.
Please refrain from leaving any personal information in the comments section
There will be 1 winner(chosen by Rafflecopter).
The winner will have 72 hours to reply to the email/tweet. If not, a new winner will be chosen
This is an US/CAN only!
Giveaway ends December 15, 2012.
Have fun!!! <3