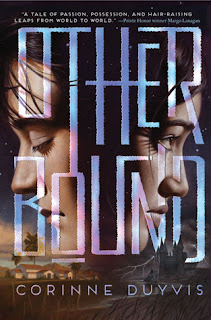 She can't be alone, because a boy from another world experiences all that alongside her, looking through her eyes.

Nolan longs for a life uninterrupted. Every time he blinks, he's yanked from his Arizona town into Amara's mind, a world away, which makes even simple things like hobbies and homework impossible. He's spent years as a powerless observer of Amara's life. Amara has no idea . . . until he learns to control her, and they communicate for the first time. Amara is terrified. Then, she's furious. All Amara and Nolan want is to be free of each other. But Nolan's breakthrough has dangerous consequences. Now, they'll have to work together to survive--and discover the truth about their connection.  {Goodreads}


This one might be a little quicker. I applaud Duyvis for her idea. It is unique and ingenious. The story has two POVs, two main characters--Nolan and Amara. I have never read a book that has taken on POV change in this way. You see, Nolan lives on Earth and Amara in an entirely different world. The problem is with Nolan. Poor Nolan has a ton of troubles. Every time he closes his eyes, he is transported to those of Amara's. This is the most interesting part of the book and what really captures you from the beginning.

That being said, I didn't finish it. Somewhere along the lines she...lost me. I understood that in reality, Amara was our main character as Nolan served as a commenter but I wanted...more. Then as I began to think Nolan would become more of a character, it kind of just shifted to him being more apparent in Amara. Then there is Amara, I liked her. She was strong willed and well, strong. Though, maybe a bit too strong like, Katniss Everdeen strong--you know, the heroine that is so strong she can't show emotion. This is perhaps why I decided to drop it. It took too much effort for me to read. It dragged on a little too much in the same way--cat chases mouse, mouse loses someone close to them, a new love interest is found in the unthinkable, and...poor Nolan still can't get a blink of sleep. No, in fact poor Nolan is basically losing himself and is closing in on the edge that will quite possibly put him into a coma.

I wanted to like it, I wanted to love it. Sadly, it was just a little lacking for me. That being said, I wouldn't give it too harsh of a critique. I would't NOT suggest someone to try it out as I think it is such a great concept and would hope someone will find it and love it more than I. Personally I was just lacking connection and for that, I give it: