{13 Days of Halloween} D10: Review/Giveaway of Charm and Strange by Stephanie Kuehn

This time around I'm going to give review and giveaway!
When you think of Halloween what do you think of?
I've provided ghosts, witches, and suspense so far
But
Don't you also think of vampires and...werewolves?
This book has a little of werewolves and a little of suspense.
It blew me away with how great the twists and turns took on life.
This book is not what I was expecting.
Read below for all my thoughts!
Then
Stick around for a chance to win a copy for yourself!! 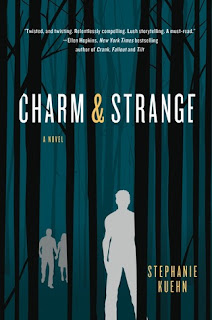 Charm and Strange
Series: none
Author: Stephanie Kuehn
Release Date: June 11, 2013
by, St. Martin's Griffen
*An ARC was provided for review purposes*
*giveaway at the end


When you’ve been kept caged in the dark, it’s impossible to see the forest for the trees. It’s impossible to see anything, really. Not without bars . . . Andrew Winston Winters is at war with himself. He’s part Win, the lonely teenager exiled to a remote Vermont boarding school in the wake of a family tragedy. The guy who shuts all his classmates out, no matter the cost.He’s part Drew, the angry young boy with violent impulses that control him. The boy who spent a fateful, long-ago summer with his brother and teenage cousins, only to endure a secret so monstrous it led three children to do the unthinkable. Over the course of one night, while stuck at a party deep in the New England woods, Andrew battles both the pain of his past and the isolation of his present. Before the sun rises, he’ll either surrender his sanity to the wild darkness inside his mind or make peace with the most elemental of truths—that choosing to live can mean so much more than not dying.

Wow. Just...wow. This book was all sorts of different. I went through a whirlwind of emotions, thoughts and debates with this book. That being said, I'm going to break up this review into parts: beginning thoughts, middle, and my conclusion of the end.

The Beginning: My first impression was that of Kuehn's writing. It is absolutely gorgeous and alluring. She automatically sets us up with a tone of mystery--the main character being aloof and a bit of that loner "freak" type, quiet and dangerous--and gloom. This pulled me in right away, being curious as to who he was and what kind of secrets he was hiding. The chapter titles were a subject of intrigue as well--every other switching between "Matter" and "antimatter". After seeing it was a prominent title for each chapter, I got curious and asked myself what the significance of it and then almost immediately after was given an answer. It's at the end of chapter 7 that it essentially is answered and it captivated me. I would go as far as saying it may very well just be one of my favorite book quotes in the history of ever. I might just get it tattooed too...*Spoiler: This didn't end up being a book I would call a favorite of all time but for this poetic notion alone, I fell more interested and will hold on to this beautiful writing piece as a favorite. Curious? Let me help you out.


"Insert quote here"
I don't usually quote in my reviews...maybe I should start?
Leave opinion in comments!

The Middle: So it turns out, each chapter alternates between Drew/Win’s past and present. Both of these POVS also alternate through each part of Andrew Winston Winters. The past is Drew and the present is Win. Until the middle, I had felt Drew was written a little too immaturely. He was supposed to be 10 I believe and sometimes I just felt like by the way he talked and acted, he seemed more like 5. It was also not until the middle where I got the most confused and thrown off. In the beginning I felt as thought the book was going to be more mental health related...like maybe he was bipolar. Then....Win started bringing up werewolves. What? Yeah, I was a bit confused but then I eased into it. I started to like it. His friend Lex and new girl outcast Jordan were introduced more and I really, really enjoyed them. Because Win was such an outcast of self decision we honestly don’t see them too much until one night at a party...

The End: Once this party goes down, this is when shiz gets real. No joke. Ugh. This end. This ending 3rd of the book is what really hooked me. Past and present start clicking together and gah. Heartbreak. So much heartbreak. So many feels. As the boom progresses, Lex and Jordan really gain a voice and these three and thrown together whether Win likes it or not. They all need each other, three people bonded together because of the pain and past of their own. A friendship that ends up real and tough.

This book is wonderfully told, again Kuehn has such beautiful writing that keeps you peeled to the pages. At the end, the very last sentence reads, “And that makes all the difference,” which isn’t very far off from Robert Frost’s “The Road Not Taken” which it’s own last line reads, “And that has made all the difference.” After reading that line I knew it sounded familiar and looked it up. A short psychology evaluation of the poem described gave something like, “Confronting and solving problems is a painful process which most of us attempt to avoid. And the very avoidance results in greater pain and an inability to grow both mentally and spiritually...” This books journey is parallel to just that. I love the poetic reference from this last sentence alone. It’s s perfect ending.

Charm and Strange holds its readers with constant curiosity, a continuous mystery front to finish. An initial whirlwind of emotions and conclusion settled down into a heartbreaking and humble end. Lovely. This is another book in which I'm curious how the hype isn't bigger than what I feel it should be--granted its another that is about 4 years old. Still, I haven't seen too many reviews on it via Goodreads, especially from bloggers I've been following since my start. *shrugs* Bottom line: I highly recommend this book to all. Next time you need something new, run out and grab this one!

Now, again, what I know you’ve really been waiting for, yes that’s right. The giveaway. I really enjoyed this book and am excited to be able to give a copy away to one of you! Please be sure to review my giveaway policy (can be found in the rafflecopter or on my giveaway page) before entering. This is a US giveaway only. Sorry!! I can only ship so far money wise. Good luck!!

a Rafflecopter giveaway
Created by, Jaiden at 6:00 AM