The Iron Queen by Julie Kagawa 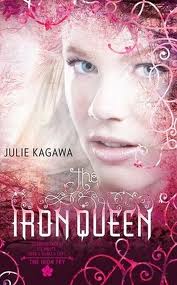 
I thought it was over. That my time with the fey, the impossible choices I had to make, the sacrifices of those I loved, was behind me. But a storm is approaching, an army of Iron fey that will drag me back, kicking and screaming. Drag me away from the banished prince who's sworn to stand by my side. Drag me into the core of conflict so powerful, I'm not sure anyone can survive it.
This time, there will be no turning back.
OK, I know I've said this before but it's really rare that I read a book I don't like. So: Omigod!!!! Ugh words can't express how much I loved this series!! I was on a road trip and we stopped at Wal-Mart to get a few things so I decided I wanted to get a book to read. When I went to the book section it was between the Iron Fey Series or Rick Riordan's new series. I was torn because I could have gotten either a series that was already finished (Iron Fey [so I thought at least]) or a series that just started (The Last Hero of Olympus). I put Riordan's book in the basket and at the last minute switched it with The Iron King. BEST.DECISION.EVER!!! I seriouslu can't stress enough of how much I love these books. They quickly became my favorite books I have ever read.

Everything about this series screams out amazing!! The whole world of the Neverever is beautiful and enticing. The Iron Fey has all the makings of a great series. It is dark, sexy, and even a bit humorous (favor of Robin Goodfellow). Julie Kagawa was just pure genius in her writing. She put together an awe-inspiring world with similarities to A Midnight Summer's Dream.

I also loved reading about the characters as they grew together and came out of all their trials despite their differences.

Meghan Chase was just a normal teen struggling to survive high school when she is forced to embrace her true heritage as a half-fey-half-human girl , daughter of King Oberon, because of her brothers kidnapping (The Iron King). Then as soon as she gets back she is again forced back to the Neverever but this time as a captive in the Unseelie Court because of her contract with the third Prince of the Unseelie Court, Queen Mab's son. Now she goes back again to help save the dying Neverever. A journey she might not even survive.

Throughout the books she grows tremendously from a clueless half-summer fey, to a heartbroken girl who longs for Ash and struggles to stop a war between the courts, to a determined young-women who will do anything and everything to save the world she has come accustomed to. You know the normal everyday trials a teenage girl goes through haha. I really liked Meghan.  by the third books she is so head strong and determined she would do anything to save the Neverever and the ones she loves the most.

Ash, the third son of Mab, the queen of the Unseelie Court. Wow...what to say, what to say. Man, words just aren't enough when it comes to this hot winter prince. At first he is so shut off and uncaring that he kind of bugs the crap out of you but as you read on you realize that icy exterior was just a mask for the tortured soul that just longs to be loved again. After losing his first love he promise to kill his once best friend Robin Goodfellow to avenge her death. He ends up falling for Meghan and gripping your heart too. Ash is so very dreamy, loving, sexy, hot, smoldering....and the list goes on. His sweet-nothings and his undying love has me in a trance.

Puck, Oh, Puck. Man, I love him too!! He is so uber hilarious with his witty lines and care-free attitude. He is Meghan Chase's best friend and secret protector by order of King Oberon. As time went on Puck ended up falling hard for the Seelie princess. He will do anything and everything for her. Fight till the death, disobey King Oberon, get himself exiled...maybe even take a bullet??? Everything about Puck is funny loving and care-free I absolutely loved him too.

This whole book is about Meghan trying to save the Neverever from fading away due to the presence of the Iron Fey who are formed by the human dreams of technology and advancement. Iron is the Fey's deadly weakness that very well may be the downfall of it all. Because of Meghan's human blood she is the only one who can touch iron without it causing any damage to her. She doesn't fall back at the knowledge that by following through with this even she might not survive. No, she puts aside her selfish reasons and pride to help the people who at one point wanted her dead, who saw her as nothing but a weakling who could be played around with. The ending was completely unexpected. I hated it and then loved it. Julie beautifully crafted all the emotion making you feel every hurt, laugh, happiness, and tragedy.

I HIGHLY recommend this book to everyone who enjoys suspense, love, humor, faeries, and some magic. I again will say absolutely in love with these books. Honestly this third book had me crying and not just simple crying like balling, having to read out load to just finish the book crying. She did a beautiful job. It was epic and enthralling. I re-read it over an over again loving it...then hating it all over again. Thralling over each heart-fluttering and heart-wrenching line...And now I just wait...wait for the fourth and final book in the series. Ash's story about him trying to over come the the barrier that lays between him and Meghan. To get his happily everafter.....Damn I can't wait any longer!! It's killing me!! :/


*Now for my favorite quotes of the book/series. It just isn't fair to have to chose two quotes when there is both Puck and Ash in it so I am going to give two for each of them!
***Warning!!!! May contain spoilers!! read at your own risk!!

"'I wouldn't defy Oberon for just anyone. But for you...' He leaned foward, touching his forehead to mine. 'I'd come back from the dead for you'"~ the infamous Robin Goodfellow
"For the rest of my life, however long we have left. I'll consider it an honor to die beside you." ~the amazing Ash
"'I love you dammit. I'm not going to watch you get torn apart when everything goes bad." ~ Puck
"A soft noise, almost a sob. Ash rose, hesitated, as if fighting the compulsion to obey. 'I will always be your knight, Meghan Chase,' he whispered in a strained voice, as if every moment he remained was painful to him. 'And I swear, if there is a way for us to be together, I will find it. No matter how long it takes. If I have to chase your soul to the ends of eternity, I won't stop until I find you, I promise." ~Ash
Created by, Jaiden at 11:51 AM