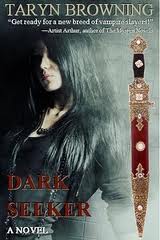 
For 17-year-old Seeker, Janie Grey, ridding the Baltimore streets of the undead is an inherited duty passed down from her Cherokee ancestors. Seeker Training Lesson #1: Never trust the undead. After her father’s tragic death, Janie creates her own life lesson: Love isn’t worth the risk. Both lessons are easy to follow until she encounters the flawed Kai Sterdam. At first, she believes he is the hybrid she is trained to hunt. But, when he has human traits, she determines she doesn’t know what he is. As Janie’s intrigue over who Kai is pushes her deeper into his mysterious past, she discovers a shocking truth that is even more harrowing than the evil they are up against. It’s a secret Kai wants to keep hidden, especially from Janie.

Ok so I know my side bar says that my next review would be of Mockingjay but I got lucky enough to receive Dark Seeker by Taryn Browning from Miss Browning herself. After finishing it last night I immediately knew thaat this review just couldn't wait.
This book was AH-MAZE-ING!!!! Ugh, I couldn't stop reading it! Taryn created such a well put together book and vividly created each scene that you knew exactly where they were at the time, what it looked like, the smell, temperature, etc. I loved how it switched to Kai's point of view every now and then, giving his input and the deep down feelings he had. This book can't be put into words. I am seriously at a loss for words. All I can say is buy it, read it, and love it!! Sigh, ugh I keep typing then erase because no madder what I put it just can't seem to give the book enough credit. For sure on my favorite list!!
After I finished I was left giddy and only craving more. Please tell me there is going to be more!
Janie is such a kick butt chica (or sorry, seeker) and I loved her!! She is strong, funny, and lovable. Being a seeker it is her duty to slay the vampires and daychildren of her area. She has been in high school for eight years now and hasn't reached the age of eighteen yet. Seekers go through a cycle where they repeat 4 years at a time in order to continue their duty to hunt the vampires and daychildren. Daychildren are a vampire/demon hybrid that are far more dangerous and develop to be more of a threat.

The daychildren start breeding there own and cause havic for both the vampires, which are evolving only trying to fit in with the humans and maybe even be accepted, and also for Janie. Now they are getting brave, coming into  Janie's territory and attacking high school  students. And if Janie's life wasn't complicated enough....one day a daychild attacks star wrestler Matt and Janie saves him but thats not the complicated part. Sometimes if a Seeker saves the life of a human the human will Imprint on the seeker. Woah there!! sound familiar to all you twilight fans? Yupp but I gotta give credit to Taryn I love the way she switched it up and I loved it honestly it can't be even compared to Twilight so forgget I said anything. (Anyways) Kai and Janie join together to help fight the daychildren and put a stop to their devious plan.

Her mom Isabel was also a seeker and is always there for support, except when it comes to Kai. With the exception of  her two friends from school, all she really has is her mentor, Abram, and her mother. Janie told herselfthat she would never get close to anyone so that she would never have to feel the pain of loss because of her father's death. She saw how bad it effected her mother and never wanted to experience it herself. That is until she meets Kai. Kai rubs her every wrong way  at first. She can't sense when he is coming, which she is supposed to because he is a daychild, he holds many secrets, and he is infuriatingly stubborn. As time goes on she realizes he probably won't ever leave her alone and he can be trusted. An big shocker.....they fall in love!!! EEP!!!

I just love the romance between the two. They slowly but surely develop feelings that they are unsure about and finally just give in until....Bum..bum.....bummmmm... *Gasp* (Your going to have to read it to find out my reason behind this dramatization)

Kai...dear, sweet Kai. Ok so guess what? I got me a new fictional boyfriend to add to my list! Kai is a hot mystery. He is a daychild but why are his eyes green when they should be black? why does his heart beat when it should be dead? why can't Janie pick up on his scent? why does he have a different scent? why does he have scars when he should fully heal after battle? and why is he hunting his own kind? All these questions are finally answered and I fell in love just as Janie did....well maybe I can just switch places with her, I wouldn't mind some action in my life, a little romance ;) and hey if you switch up the letters a bit and add a "d" it could totally be my name... Janie=Jaiden! Vualah!! hehehe.

Anyways back to Kai.. he is an absolute sweet heart who lives with a guilty consciousness and doesn't want to be lonely anymore. He truelly "feels" for Janie and would lay down his life for her in a heartbeat. Again I love how further into the book Taryn gave his view on things every now and then because I truly got to understand him and fell even more in love with him.

All in all I highly recommend this book. I loved it and surely you'll love it too! Everything about this book screamed amazing! The whole story line, the battles, the complications, the romance. Oh! and the ending, I almost died of a panic attack!! Again I just loved, loved, loved this book! Huge props to Taryn Browning, an amazing author and person! One of my favorites and a Great on my list!

Now for some amazing swoon worthy quotes:
**Warning content may be spoilery:

"She lay on the floor, out of breath and staring up as he hovered over her. 'Done yet?' He smiled victoriously. 'Nope.' Janie rolled out from under him, scrambling
back to her feet. She squatted into a sweeping circular kick along the floor, taking his feet out from under him. He landed on his backside. She slid over to him and raised her arm, pretending to plunge a dagger into his skull. Kai swiped her knee out from under her and she landed directly on top of him.'How about now?' he said, their faces only inches apart."
"'Janie—with you, life is always interesting,' he said.'
I never know what you’re going to do next.' He balanced
on his bike and drifted backward. He smiled. 'You keep
me on my toes, Janie Grey.' The bike’s engine roared to
life. 'Later.' He nodded and took off in a flash."
"His lips moved to the corner of her mouth and
kissed her gently. He drew back. His words were
hesitant, shaky, 'Janie I—'
Janie placed her finger on his lips. 'Just kiss me.'”
~Ok, so I cheated and posted three quotes instead of my usual two but...I couldn't help myself!! There are way to many!! hehe :)
Created by, Jaiden at 10:57 AM