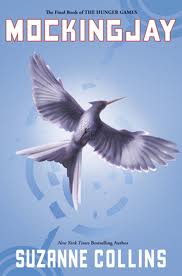 Mockingjay (#3 of Hunger Games Trilogy)
Author: Suzanne Collins
Publisher: Scholastic Press
Pages: 390
Goodreads synopsis:
Young Katniss Everdeen has survived the dreaded Hunger Games not once, but twice, but even now she can find no relief. In fact, the dangers seem to be escalating: President Snow has declared an all-out war on Katniss, her family, her friends, and all the oppressed people of District 12.

First of all I have to give props to the first two books! The second, Catching Fire, was my favorite of the three. It had romance, suspense, sadness, and action.

Mockingjay takes place in district thirteen after
****SPOILER******district twelve had been destroyed. ******** END OF SPOILER**********
Katniss along with her family, Gale and his family, and a few others from the past now live there. She is pretty much in full blown depression and honestly the book just kind of drags which frustrated me. I had such high hopes for this book and it did nothing but anger me. Yes there is still some positives but Katniss's attitude and the whole "poor me poor me" thing is aggravating. Again I loved this series and would never take back the time I spent on it but I don't know it just kind of let me down.
Katniss is now the leading face for the rebellion and Snow has got it out for her. Peeta is captured and being tortured, Finnick is in small depression, and many more problems have erupted. Their only hope is to slowly take each district on their side and away froma capitol allegience. Once this is done they can inflict war. There are so many deaths and honestly the ones who diserved a proper hero's death didn't get the honor they deserved. The ending was kind of rushed but I guess I liked it. I got what I wanted from the ending. There was so many questions left un-answered though. And I'm just going to leave this review like that..... not much more to really say. It was good just dragged on for awhile, kind of depressing, and just left an O.K. feeling with me
Ugh this review was hard. I so wanted to give a great nothing but positive review but I just couldn't. I pledged to give nothing but honesty in my reviews so that is what I had to do. All in all I enjoyed this series even with the ruff ending. I would recommend this series to anyone who wants an action packed dystopian read. Again I would never take back reading this series and who knows you might find you have a different experience and feeling about this last book! :)

Now for my favorite quotes:
***Warning content may be spoilery!!