Hey everyone! Today is Final day of my Iron Fey devotions! Sorry it is so late of a post but Life has been pretty busy lately! Of course I will still be posting other stuff linking to the Iron Fey Series but this event has to have an end....with my favorite quotes from The Iron Queen!! Loved everything in this book! It is my favorite of the three! Sadly I still haven't received my Iron Knight copy and that officializes it... I am never pr-ordering a book ever again!! So because of that I can't give my favorite quotes or anything like that yet but I will very soon!! I could have had it already by just going out and buying it!!! Anyways enough of my complaining...without further a due here are my favorite quotes! Enjoy :) 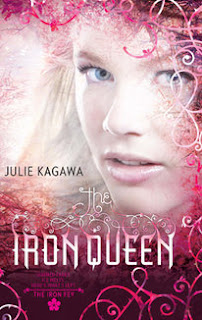 “My name is Ashallyn'darkmyr Tallyn, third son of the Unseelie Court...Let it be known--from this day forth, I vow to protect Meghan Chase, daughter of the Summer King, with my sword, my honor, and my life. Her desires are mine. Her wishes are mine. Should even the world stand against her, my blade will be at her side. And should it fail to protect her, let my own existence be forfeit. This I swear, on my honor, my True Name, and my life. From this day on..." His voice went even softer, but I still heard it as though he whispered it into my ear. "I am yours.”

“His forehead bumped softly against mine, his brilliant silver gaze searing into me. “I plan to keep you, from everyone, for as long as I’m alive. That includes Puck, the false king, and anyone else who would take you away.” One corner of his mouth quirked, as I struggled to catch my breath under his powerful scrutiny. “I guess I should’ve warned you that I have a slight possessive streak.” -ASH”

“You are my heart, my life, my entire existence." -Ash”

“But ... but what if I hit you?”
A snort. “You’re not going to hit me.”
“How do you know?” I bristled at his amused tone. “I could hit you. Even master swordsmen make mistakes. I could get a lucky shot, or you might not see me coming. I don’t want to hurt you.”
He favored me with another patient look. “And how much experience do you have with swords and weapons in general?”
“Um.” I glanced down at the saber in my hand. “Thirty seconds?”
He smiled, that calm, irritatingly confident smirk. “You’re not going to hit me.” ~Ash&Meghan

“A soft noise, almost a sob. Ash rose, hesitated, as if fighting the compulsion to obey. "I will always be your knight, Meghan Chase," he whispered in a strained voice, as if every moment he remained was painful to him. "And I swear, if there is a way for us to be together, I will find it. No matter how long it takes. If I have to chase your soul to the ends of eternity, I won't stop until I find you, I promise."
And then he was gone.”

“The cait sith has disappeared.”

“Hey,” I whispered, as Ash slipped his arms around my waist from behind, drawing me close. I could feel his glare aimed at Puck over my head, a silent, protective gesture that spoke louder than any words. Mine. Back off.”
~All three(kinda)


“Good idea,” Puck echoed from the back of the cave. “Why don’t you take first watch, prince? You could actually be doing something that doesn’t make me want to gouge my eyes out with a spork.”

Ash’s lips curled in a smirk. “I would think you’re better suited to the task, Goodfellow,” he said without turning around. “After all, that’s what you’re best at isn’t it? Watching?”

“Oh, keep it up, ice-boy. You’re gonna have to sleep sometime.”~Ash and Puck

“One more thing,” Ash said in his dangerous, soft voice as we turned away. “If you do not return with her,” Ash continued, staring him down, “if she comes to any harm while she is with you, I will turn this entire camp into a bloodbath. That is my promise, lieutenant.”~Ash

“I wished that, for once, faery tales – real faery tales, not Disney fairy tales – would have a happy ending.”  ~Meghan

“Ash brought my hand to his lips, his eyes never leaving mine. "I love you, Meghan Chase," he murmured against my skin. "For the rest of my life, however long we have left. I'll consider it an honor to die beside you.”~Ash

“Puck’s eyes gleamed, feral and menacing. “Oh, I don’t know, princess. Maybe it was because I was stupid enough to care about you. Maybe I actually thought I had a chance. Silly me, thinking that one little kiss meant anything to you.” -PUCK”

“We could die tomorrow," I whispered back. "I want to be with you tonight. I don't want to have any regrets, when it comes to us. So, yes, I'm sure. I love you, Ash.” ~Meghan

“My, aren't we bossy today. Give a girl an army and it goes straight to her head. - Puck”

“I want her to be happy, and she's most happy with you. Maybe this will make up for... past mistakes." He shook his head and returned to his normal idiocy. "So, either you say, 'Sure, I'd love to have you along,' or you have a big bird dropping things on your head the whole trip.”  ~Puck

“Ah.” Puck’s emerald eyes sparkled with glee. “And so they come crawling back for Puck’s help after all. Tsk tsk.” He shook his head and took another bite of the apple. “How easy it is to forget grudges when someone has something you need.” -PUCK”

“He was my best friend, and I'd always have a spot for him in my heart, but... it was you, Ash. I didn't really have a choice. It's always been you.”~Meghan

“If I'd thought I would regret it," he said calmly, "I never would have made that oath. I knew what becoming a knight would mean. And if you asked me again, the answer would still be the same." He sighed, framing my face with his hands. "My life... everything I am... belongs to you.”~Ash

“I have always loved you, princess" Robin Goodfellow promised, his green eyes shining in the darkness. "I always will. And I'll take whatever you can give me."~Puck

“He hesitated, but then stepped beneath the tree and knelt, depositing me gently on the ground between two giant roots. And he stayed there, kneeling beside me, holding my hand in his. Something splashed the back of my hand, cold as spring water, crystalling to my skin. A faery's tears.”

“I don't care what it's called. I just want to be with her at the end. I'm not giving up. Meghan, I'll be with you soon. Please, wait for me.”~Ash

“Well, don't worry about it too much, princess. Let ice-boy cool off for the night and then try to talk to him tomorrow. He wont's stay angry with you too long, I bet. Ash isn't one to hold a grudge. ''
''What are you talking about? He's held a grudge against you for centuries!''
''Oh, right.'' - Puck and Meghan”

“Fairy godmothers didn't exist, and even if they did, they wouldn't wave a magic wand and make everything better.(Not without a contract, anyway.)”

“I learned long ago that you don't get in the middle of a lover's spat. Nothing EVER goes as planned - People fall in love with the wrong person, someone ends up with a donkey head and then its a whole big mess. - Puck”

“for better or worse, i'm afraid you're stuck with me now." -ash”

“It’s not that I don't trust the guy, but…no, wait--that's exactly the reason.”

“You'll take her to a healer, prince, or so help me I will cut out that piece of ice you call a heart and take her myself.”~Puck

“Goodfellow?” Glitch stared at Puck nervously. “Robin Goodfellow?”
“Oh, look at that, he’s heard of me. My fame grows.” Puck snorted and leaped off the roof. In midair, he became a giant black raven, who swooped toward us with a raucous cry before dropping into the circle as Puck in an explosion of feathers. “Ta-daaaaaaaaaa.”~Puck

“I have always loved you, princess,” Robin Goodfellow promised, his green eyes shining in the darkness. “I always will. And I’ll take whatever you can give me.”
I looked down, unable to meet his open stare, human fears and selfconsciousness coming to the surface. “Even if all I can offer is friendship? Will that still be enough?”
“Well, not really.” Puck dropped his hand, his voice turning light and carefree again, more like the Puck I knew. “Damn not being able to lie. Princess, if you suddenly decide ice-boy is a first-class jerk and that you can’t stand him, I’ll always be here.”~Puck&Meghan

“One night, bored and restless, I found a stack of dusty board games in a closet, and bullied Ash into learning Scrabble, checkers and Yahtzee. Surprisingly, Ash found that he enjoyed these “human” games, and was soon asking me to play more often than not. This filled some of the long, restless evenings and kept my mind off certain things. Unfortunately for me, once Ash learned the rules, he was nearly impossible to beat in strategy games like checkers, and his long life gave him a vast knowledge of lengthy, complicated words he staggered me with in Scrabble. Though sometimes we’d end up debating whether or not faery terms like Gwragedd Annwn and hobyahs were legal to use.”
~~~~~
Dang... I am going to have to stop there... god I can go on and on but honestly I would just be reciting the whole book!! Hope you enjoyed these quotes!! :D
Created by, Jaiden at 7:07 PM